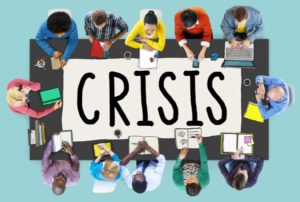 When a crisis hits you need to have a team of key people in place, so you can respond quickly and effectively before the situation escalates. So, let’s look at whom you need on your team – and how the team should operate.

This is the person on your team with the experience and expertise to plan and execute the right communications response in any kind of PR crisis or internal crisis. Ideally, this person will also exude a calming influence on the team, while knowing how to manage the crisis response narrative. If you don’t have an internal Crisis Communicator this role can also be managed by The Crisis Advisor.

When a major PR crisis hits, it’s inevitable that the CEO will be involved in some way, whether you are making key decisions, delivering a message, or as a spokesperson providing a face for the company’s crisis response. But who else on your team can pivot from their day-to-day work and take on a key decision-making role in the crisis response? Ideally, you will have at least two or three of these key leaders.

You need someone who is an accomplished communicator and a clear thinker to help the crisis communicator and the CEO formulates a response. This person will have a proven track record for making smart decisions with limited information on short timetables. You will also need someone to manage the internal crisis response. Someone who has the authority to control and monitor what your team says and to whom, who can also be a calming influence as they deliver messages from the decision-makers to rest of the team.

Every Key Leader who acts as company spokesperson can also always secure a higher success rate by participating in Media- and Message Training – especially in a crisis. This will also secure the alignment of the company key messages in the crisis-management team

At some point in your crisis response, you will need a person whose sole duty is to manage media interest. From moderating social media to responding to media requests and connecting the right messages with the right people, this can be a full-time job in the middle of a crisis.

When you’re very close to a situation, you can miss details or make assumptions that diminish the effectiveness of your crisis response. That’s why it makes good sense to bring in an outside advisor who specializes in crisis communication. This person or team has a different perspective that can prove invaluable in formulating and executing a crisis response.

To get your own Crisis Advisor as CEO also means that someone fully has your back – and that the advisor will work with you and your in-house team to build a narrative and implement a crisis response that should minimize the damage to your brand reputation and put your company in a better position to begin rebuilding credibility.

When facing a PR crisis your Crisis Communications Advisor also has an extensive list of key media contacts with whom they have developed good working relationships. When speed really matters and you need positive earned media, knowing exactly whom to call is a vital aspect of an effective external crisis response.