Theme: Scandinavians – similar, but not the same. 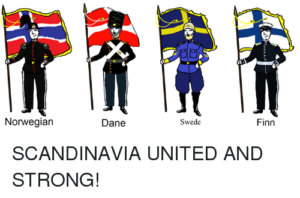 There is little doubt that the Scandinavian people are often regarded as a slightly homogeneous crowd, where the differences are far less than the similarities. And rightly so, for us Danes, Swedes, Norwegians and Finns are very similar to each other both in appearance, behavior, levels of education, mentality, shopping habits – well, you name it.

The Swedes enjoy structure and appreciate preparation and effective execution,  and facts, figures and graphs will bring you far.

The Finns are a more reserved people who value formalities and strong factual statements. Body language is seen as a sign of uncertainty.

The Norwegians are a more informal people who value quality over price and do not necessarily enter into tough decision-making procedures.

And then we have the Danes. The most relaxed of the four people, but characterized by the fact that – despite a high degree of un-formality and earthiness – they prefer a direct and executing decision-making process.

Small differences, but all relevant to consider when creating a successful marketing and PR strategy for you next Scandinavian campaign.